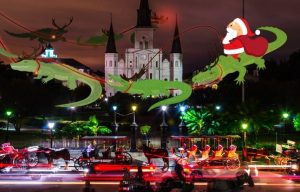 Santa Claus becomes Père Noël when his sleigh reaches the bayous of Cajun Country in Louisiana. His sleigh turns into a pirogue, and his reindeer turn into alligators.  Père Noël and his gators follow the bonfires, built as 20 foot towers, along the levees to bring presents to les bonnes enfants. He makes his way to their houses on the South Louisiana Rivers and bayous. Just like the reindeers, Santa’s alligators all have names. They are Tiboy, Suzette, Renée, Ninette, Pierre, Alcée, Celeste, and Gaston.

About The Levee Bonfires

The bonfires also light the way for the folks attending Midnight Mass.  This is a very Catholic region, and these traditions have been followed by generations of men and women.  Bonfires for this celebration originally were created from a pyramid of long logs, making the shape of a cone.  Often they were 20 feet tall and could be seen from quite a distance.  In modern times, revelers have gotten creative, erecting bonfires in the shape of things we know such as Cajun cabins or pickup trucks. When it gets dark on Christmas Eve, the structures are set on fire. Some bonfire organizers provide bowls of gumbo to those who come to watch the spectacle. These Christmas Eve bonfires are most commonly found in St. James Parish (county), some 30-40 miles upriver from New Orleans. As many as 100 or more bonfires may be erected in the adjoining communities of Gramercy, Lutcher and Paulina, and more may be scattered in other locations in St. James and neighboring parishes.

After mass, folks enjoy a bit of hot Gumbo before retiring for the night.  However, while the bonfires are burning prior to mass, family and friends gather for a nice bowl of Gumbo (usually consisting of crab, shrimp, and/or oysters) and some Jambalaya (either made with seafood or chicken with Andouille sausage) served with hot French bread that has been buttered. Also look for Cajun sausage and fried turkey—or a signature Louisiana Turducken! Turducken is a boneless turkey, stuffed with a boneless duck, that has been stuffed with a boneless chicken.  Each bird has also been stuffed with oyster dressing.  This is traditionally served with mashed or sliced sweet potatoes covered with a praline sauce. Bread pudding, pralines, fudge candy, pound cake and divinity are some of the desserts served. There’s music, laughter, and dancing as all make merry on Christmas Eve as they bring each other glad tidings. Stockings or socks are hung by the fireplace for Père Noël to leave candies, fruit, and small gifts.