Get Out & Explore While Social Distancing

Get Out & Explore While Social Distancing

The weather has been gorgeous in New Orleans and even though we are under a Stay-at-Home order for a little while longer, you should still go out, explore and enjoy the sun, just make sure you practice social distancing.

Explore Your City By Bike 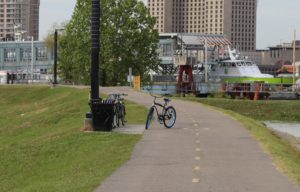 Right now there is hardly any traffic. Riding your bike lets you explore and rediscover your city. If you have not ridden your bike in a while, take a good look at it before heading out.

The tires on your bike might be flat. Get out your bike pump or compressor or head to the nearest gas station to pump up your tires. Somewhere on your bike’s tires it will say how much pressure they require. Don’t forget to check your brakes before getting out in the streets. Lube your chains so your bike will shift easier. If you are not sure about the safety of your bike visit your local bike shop. Some bike shops are open right now by appointment only so call ahead.

Remember to grab a bicycle helmet. As they say, a helmet is cheap insurance. Also, Louisiana requires that any person under the age of 12 riding a bicycle, as an operator or passenger, must wear a protective bicycle helmet. For other bicycle rules and regulations, visit: http://wwwsp.dotd.la.gov/Inside_LaDOTD/Divisions/Multimodal/Highway_Safety/Bicycle_Ped/Pages/La_Bicycle_Laws.aspx

When riding through our city, respect traffic rules. It might be tempting to ride down one way streets the wrong way, especially in the French Quarter, but it is illegal and can lead to rather bad habits. We have heard that the police started to write tickets for bicyclists riding down a one way street the wrong way. Soon traffic will return and when you turn into a one way streets, cars can accidentally hit you.

In New Orleans, we love our Streetcars; however, getting your bicycle tire stuck in the tracks can be dangerous and will lead to a crash. Whenever possible, try to cross the tracks in a 90 degree angle. 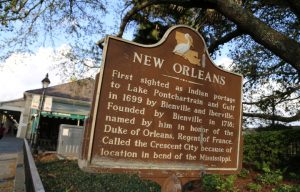 Right now is the perfect time to rediscover your city. As you know, New Orleans is filled with history. But what do you really know about the city’s background? If you are stuck at home with your kids, head out and learn about New Orleans’ rich history!

You may remember that Jean-Baptiste Le Moyne, Sieur de Bienville and Pierre Le Moyne d’Iberville founded the city in 1718 and named it after in honor of the Duke of Orleans, regent of France. Many other streets in the French Quarter are named after Saints and French Royals and patrons. Others are named after Spaniards who took over the city from the French in the late 1760s. Do you know where most of the streets with the Spanish names are? Another fun fact, some of the Saints’ streets were used to keep the French royalty streets separated since the French Royals were struggling with one another for power at the time.

The list of famous writers who were from or worked in New Orleans seems almost endless. William Faulkner, Mark Twain, F. Scott Fitzgerald, Tennessee Williams, Anne Rice and so many others found inspiration in the city! How many authors can you name who worked and lived in the city? Try to find the houses they stayed or lived in.