A Halloween Adventure Not For An Empty Stomach 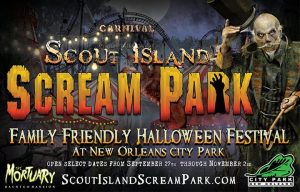 The spooky time of year is almost here. When heading over to one of New Orleans most amazing Halloween attraction this year, you want to make sure you had a good meal before you go, because a good scare will make you hungry! Have a delicious Cajun dinner before heading out to Scout Island Scream Park!

Scout Island Scream Park, which opens with a VIP party on Friday, September 27, is a unique, immersive experience in City Park. It’s a Family Fun Festival which opens around lunch time on the weekends between late September and early November with Festival music, food, entertainment, carnival rides and a hay ride. Furthermore, Scout Island Scream Park features an amazing Kid Zone! As night falls, Scout Island Scream Park evolves into a dark carnival with unusual monsters, great illusions, stunning special FX, and original costumes, makeup, animations and frightening detail created by the artists of The Mortuary Haunted Mansion. Only the courageous will survive the intense encounters with these infamous creatures of the night. The island located in the park just North of I-610 will become a thrill-seeker’s dream or nightmare. Check out what Scout Island Scream Park has planned for you this year!

Get your tickets now: https://scoutislandscreampark.com/tickets/ 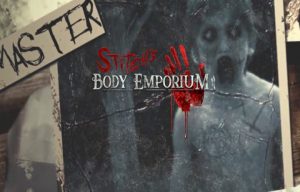 This is something you do not want to attempt to on an empty stomach. Scout Island Scream Park features Haunted Attractions and Fright zones. Here a small taste of what you can expect:

The doctor is not a servant of the people. He is a Picasso of blood. Known as Stitch, this dog-faced terrorist fancies himself an artist with a never-ending thirst for the kill. His greed of perfection drives him to remake flesh. 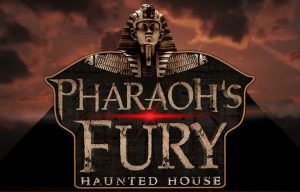 There are worse things than Death! Explore the ancient Egyptian Tomb of Anubis, the God of Death, where danger looms around every turn. Escape in “Indiana Jones” style with life threatening traps and snares. Spikes, Snakes, Crocs, and The Living Dead… Face the Mummy’s Curse in PHARAOH’S FURY HAUNTED HOUSE!

APOCALYPSE is an interactive, live combat zombie themed undead shootout! It’s a live action, zombie survival experience thrusting guests into this apocalyptic world, shooting their way on a “fight or die” survival mission through the living-dead. Members of the team will use video-game-like, infrared military training replica weapons to clear the infected in an infested military base where the undead thrive. Then your team must venture out into the dark woods, clearing the surrounding area, before finishing your experience discovering the lab where the outbreak began. It’s a cutting edge haunted house experience on steroids, unlike anything you have experienced! Availability is limited so get in line early! 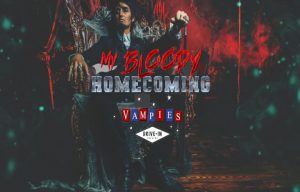 The year is 1957 and it’s Angelville High’s Homecoming. The team celebrates with a Greasers vs Jocks parade gone very wrong. As night descended, so did the other team… They’re Vampires! It’s the first area guests experience when entering the Scream Park! And don’t forget to check out what’s playing at VAMPIRES DRIVE-IN THEATER!

Medusa was once a beautiful mortal and avowed priestess of Athena who was cursed after being raped by the sea god Poseidon. Athena punished her, turning Medusa into a hideous hag, making her hair into writhing snakes and her skin was turned a greenish hue. Anyone who looks into Medusa’s irresistible gaze is turned into stone… especially men. Cursed for all time, Medusa guards what was once Athena’s Temple that she now claims as her own. 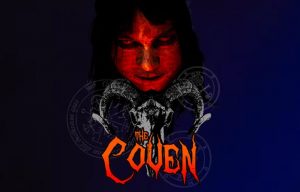 Halloween’s origins date back to the ancient Celtic festival of Samhain. This ancient Pagan Witchcraft festival of darkness blurred the boundary between the worlds of the living and the dead.

Around the turn of the 18th century, Countess Elizabeth Blair is said to have lured children to their doom drawing blood from them. She was probably the most prolific serial killer of all time, Blair is believed to have murdered 666 people, paying homage to her deity. She tortured and murdered young children she abducted. Legend has it she would bathe in their blood to maintain her youthful appearance. This earned her the nickname The Countess of Blood.

The Countess of Blood was hunted by townsfolk and accused of being a witch with the help of The Malleus Maleficarum. This book, known as the Hammer of Witches, was essentially a guide on how to identify, hunt and interrogate witches. Of course she was found guilty. The witch was put on public display and burned at the steak where it was said, she just WOULD NOT DIE!