Kenner Freedom Fest at The Lake 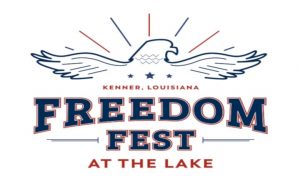 Gates to the FREE event open at 3:30 p.m. on Sunday, Sept. 1, in Kenner’s Laketown at the foot of Williams Boulevard and will end with a fireworks finale at approximately 9 p.m.

What You Need To Know

The event will begin at 4:30 p.m. with Kenner’s own Jenna Hunts performing the National Anthem and her new hit single “Real”. John Schneider takes the stage at 5:15 PM followed by High Valley at 6:15 PM, and Clint Black headlining the entertainment at 7:45 PM.

John Schneider is a globally popular actor and country music singer who has a career spanning over four decades. He is a four-time chart topping county artist with 19 albums, and 52 new tracks in 2018 alone when he released one song a week in a project called The Odyssey. Additionally, he co-founded the Children’s Miracle Network Hospitals in 1983 and has since raised $7 billion. As an actor, Schneider is probably best known for his roles as Bo Duke on The Dukes of Hazzard, and Jonathan Kent on Smallville, and currently is starring in “The Haves and the Have Nots.”

High Valley is the rising star duo of two small-town Canadians, Brad and Curtis Rempel, who produce the sound of the bluegrass-infected country music. High Valley’s career has recently shifted into overdrive with their breakout success of their 2016 debut album Dear Life with the single She’s Mine, which was on the Top 10 country radio. The band just released their latest single earlier this year, Single Man, ahead of their upcoming fifth album.

Clint Black has one of the most storied careers in country music. His fame began as he was a part of the fabled Class of ’89, when he had five consecutive No. 1 singles from his triple-platinum debut album Killin’ Time. He followed that with a string of platinum and gold albums throughout the ‘90s. It is most impressive that Clint Black wrote or co-wrote every one of his more than three dozen chart hits including, “A Better Man,” “Where Are You Now,” “When My Ship Comes In,” “A Good Run of Bad Luck,” “Summer’s Comin’,” “Like the Rain” and “Nothin’ But the Taillights.” During his career he has sold over 20 million records, earned more than a dozen gold and platinum awards including a Grammy, and countless CMA, ACMA, and AMA awards. He even contributed to the charity album Hurricane Relief: Come Together Now after Hurricane Katrina. Finally, with the 30th anniversary of Killin’ Time approaching, he is continuing his tour of North America.