Mardi Gras is behind us and Lent is here, which means some of you may be looking to find some fish recipes for Fridays. Since it is not always easy to keep everybody in your family happy, we have an easy and quick recipe that will have all of them asking for more.

What People Eat For Lent & Why

There are a few explanations out there why we would eat fish on Fridays during the 40 days of Lent. In ancient times, people would abstain from all animal products and become vegan for 40 days, while some would allow seafood and fowl. Some do not allow fruit or eggs, whereas some will only eat bread for Lent. In the Roman Catholic Church people would abstain from just meat and poultry on Ash Wednesday and every Friday during Lent. Dairy, eggs and fish would still be eaten. Jesus died on a Friday and some people fast on Fridays to commemorate this sacrifice. According to St. Thomas Aquinas, meat is too much an aphrodisiac to be consume during a time when people are supposed to be fasting. Nowadays, some use Lent to live healthier including giving up smoking and/or drinking,  or just loosing weight. No matter what your motivation is to eat Fish on Fridays till Easter, we have a delicious recipe for you. Try Mulate’s Seafood Casserole. 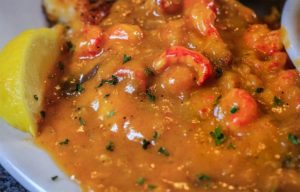