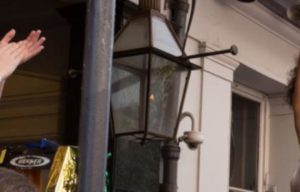 In honor of its 50th anniversary year, Royal Sonesta New Orleans is proud to announce the theme of Greasing of the Poles 2019 –Hail to Half a Century! The signature Carnival spectacle is free and open to the public, and it’s all happening the Friday before Fat Tuesday on March 1 at 10 a.m. in front of the hotel, located at 300 Bourbon Street. With host Bryan Batt and a star-studded lineup of greasers including Ashley Hansen, Desiree Ontiveros, April Dupré and even Justin Devillier, along with a number of special guests and a toast with iconic Moët & Chandon, this is a can’t-miss event.

What You Need To Know

This year’s festivities will also include Carnival royalty from the Krewe of Zulu and Krewe of NOMTOC plus other special elements, including appearances by New Orleans songbird Robin Barnes and Big Easy favorite, the Brass-A-Holics. Leroy Jones and the Original Hurricane Brass Band will entertain the revelers with performances of Mardi Gras classics during the show, and special guests from Merry Antoinettes, The Pussyfooters, the Oui Dats de la Nouvelle-Orléans and the Mystic Krewe of Femme Fatale will join the festivities.

Greasing the landmark hotel’s poles will be a cultural cross selection of contestants representing the distinctive character of New Orleans. From Crescent City staple Hansen’s Sno-Bliz, Ashley Hansen; entertainment entrepreneur and extraordinaire Desiree Ontiveros of Badass Balloon Co.; WWL-TV personality and founder of Footprints to Fitness wellness company April Dupré; and James Beard Award-winning chef Justin Devillier will go head to head and pole to pole for the namesake task, each vying for the first-place title based on the judging panel’s scores. Contestants will also have the chance to win the coveted “People’s Choice” award, based on crowd participation, response and applause.

Greasing of the Poles is free and open to the public. For prime viewing, spectators should plan to arrive early.