When Did We Start Frying Chicken?

When Did We Start Frying Chicken? 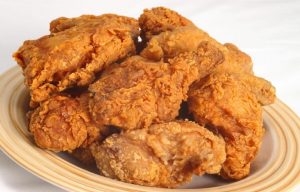 Fried chicken is a staple of Southern and Cajun cuisine, but who started preparing chicken this way? It’s hard to say when exactly people started frying chicken and where the great tradition started, but from what we understand, Scottish immigrants are credited for bringing the dish to the Deep South. Apparently there is a tradition in Western Europe of frying strips of chicken meat dating back to at least Roman times. However, historians say, the most common method of cooking chicken during a time when kitchen equipment was rather primitive was baking or boiling. The Scots preferred to pan-fry the meat in fat, according to https://foodanddrink.scotsman.com.   Throughout time different spices were added to make the fried chicken even more flavorful. Fried chicken also gained popularity before refrigerators were invented because the meat traveled comparatively well in the heat. In the late 20th century thanks to the success of fast-food chains like KFC and others fried chicken became famous around the world. Hungry yet?

In a large bowl, mix eggs, beer, Cajun seasoning, cayenne pepper and baking powder. Rinse and dry the chicken and place it in the marinade. Put the bowl in your refrigerator and let the chicken marinate overnight. The next day, coat the chicken with flower and fry it in oil at 350 degrees for approximately 15 minutes.