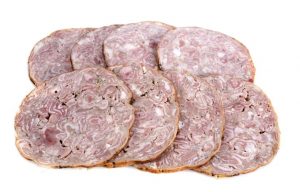 Have you ever had Andouille? It’s a spicy pork sausage that’s seasoned with garlic and other spices. Andouille has become a staple of Louisiana Creole cuisine. The sausage originated in France and was brought to Louisiana by French immigrants.  Acadian exiles who merged with the French influenced the dish. Both groups created much of Louisiana Creole culture and cuisine. The traditional Andouille ingredients of the coarse-grained smoked sausage are usually pork, garlic, pepper, onions, wine, and seasonings. Usually it is made of parts of the gastrointestinal system of the pig.

Andouille Around The World

The specialty sausage comes from Western France, particularly Vire in Lower Normandy. Andouille is still a gourmet product in the area. Today many  people outside of the French region enjoy the sausage.  The name is borrowed from the French word andouille which is derived form the Latin word induco which means “to lead in” or “to bring in.” In Germany similar sausage recipes have a long history as well.

Mulate’s, conveniently located in the CBD, is known as the original Cajun restaurant, famous for preserving and celebrating the food, music and culture found in the small towns and along the bayous of south Louisiana. But the restaurant that prides itself on being true to its roots would never have opened its doors if owner Kerry Boutté hadn’t ventured out of Cajun Country and into restaurants and dance halls of New Orleans, Houston and even Europe. There is a lot to learn about us, so just stop in and experience the original Cajun restaurant. For more information click here: https://mulates.com/