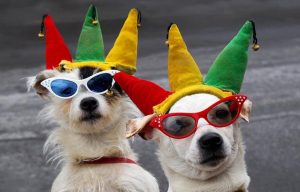 On February 4th, 2018, the dogs are coming to the French Quarter. But, these are not just any dogs….they are Royalty.

The Pawty starts at Armstrong Park at 10:30am and continues til 5pm. The Barkus parade rolls at 2pm through 15 blocks of the Vieux Carre, stopping periodically for adoring fans along the way including the VIP Reviewing Stand at Good Friends Bar. Parade viewers will have the opportunity to personally meet every member of this parade and even receive gifts from beads to edible treats.

King Baker, the son of Tim and Jenny Williamson, and the brother of Katie Blair Williamson, is an English Cream Golden Retriever who is excessively handsome. King Baker Williamson knows that the French Quarter will become ground zero for the quest of the Iron Paw with this year’s theme: “Game of Bones: Barkus Marks Its Territory.” He expects his canine krewe members will amass like an army in a quest for the dominance they have deserved for so long. He invites everyone to the pre-pawty parade and post-pawty parade at Armstrong Park that starts at 10:30 a.m.

Queen Luna Settoon is the daughter of Alden and Brittany Settoon of New Orleans. She is a gorgeous Border Collie who was adopted from the St. Tammany SPCA where she ended up after wandering the roads on the Northshore totally alone. Her parents say it did take some time for her to overcome of fear of almost everything and is now truly the embodiment of unwavering courage. With the Queen’s adoption, she was catapulted into canine royalty. Her uncle, Blue Settoon, was a former King of Barkus and she served as Grand Marshall last year. Former King Blue is reportedly giving her much advice about how to be a great monarch.

After you have enjoyed the Barkus festivities, stop by Mulate’s Cajun Restaurant for a bite to eat, refreshing drink, and some Cajun dancing. We are famous for a great Cajun food, family atmosphere and Cajun Bands. We look forward to a great weekend.