What is the Endymion Parade?

What is the Endymion Parade?

Endymion is one of three Super Krewes that entertains the city of New Orleans with music, great bands, blinking beads, and extravagant floats during Mardi Gras. With more than 3,000 riders, it is by far the largest parade with the huge crowds with over 37 floats, some having up to nine sections, with over 80 chassis!

The Endymion motto is “Throw ’til it Hurts!”

This parade is an all-day event beginning on Orleans Avenue with Samedi Gras which very well may be the world’s largest block party! More than 30,000 people head to Mid-City with food, beverages, friends and family to listen to some favorite bands like Groovy 7, the Topcats, and the Bucktown All Stars. Many people stake out their “spot” weeks in advance. It truly is an event within a parade.

Endymion rolls on the Mid City route down Canal Street to the Superdome.

Endymion is the only parade that rides to and through the Mercedes Benz Superdome where the Endymion Extravaganza is held and what a party it is! After the gigantic floats, Endymion continues the tradition of providing the finest entertainment in Mardi Gras. Past performers include Steven Tyler, Pitbull, Luke Bryan, Carrie Underwood, Kelly Clarkson, Maroon 5 and this year is Rod Stewart! Eleven regional and national bands entertain 20,000+ until 3:30 am! 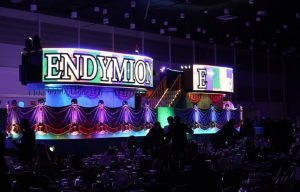 Mardi Gras is a marathon, not a sprint. Parade goers need to plan for a long day filled with every form of entertainment. But, this means that you need to get a good meal. If you are headed to Endymion, stop by Mulate’s for a great meal. We have the best local, Cajun food that will give you the energy to dance, catch beads, and of course carry them all back home with you.