There are as many recipes for Gumbo as there are Creole and Cajun family traditions. In the seafood market during the holidays, you can hear customers discussing what they put into their Gumbo. Creole Gumbo is prevalent in the Metro New Orleans area, whereas Cajun Gumbo grew out of the traditions in the bayous and swamps in South Louisiana. Cajun cooking turns up the heat, which is one distinguishing characteristic from Creole cuisine. Gumbo is a hearty soup, not a stew. There’s Seafood Gumbo, Chicken Andouille Gumbo, Turkey Gumbo, and Duck Gumbo. In Seafood Gumbo, the most popular seafoods incorporated into the recipe are shrimp, crabs, and oysters. It is a staple on Fridays during Lent among the Catholic community.

Gumbo begins with a Big Pot because if you’re gonna make Gumbo, it’s best to make a lot..It then all starts with a dark caramel-colored roux, which is the process of browning flour in oil and is used as a thickening agent. The recipe builds from there… 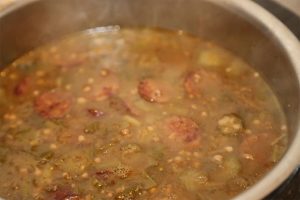 In a large pot, sauté onion and bell pepper in oil for about 10 minutes. Add seasonings, then water and bring to a boil. Add roux, stir constantly until melted. Add chicken and let simmer on medium-high heat for 1 hour. Add smoked sausage and let cook for 20 minutes more. Serve over white rice. Serves 6-8. 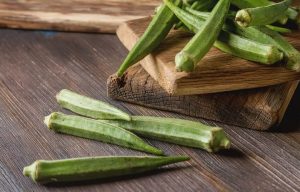 In a large pot, heat oil and add onions, bell pepper, garlic, and okra. Cook over medium heat for 30-40 minutes, stirring frequently. The okra will be slimy at first, but once your cook it for a while, the slime will disappear. Add seasonings and stir. Add water, stir, and bring to a boil. Add roux, stir frequently, and make sure that roux dissolves completely. Boil for about 15 minutes. Add shrimp, and bring back to a boil. Turn off heat and let the gumbo rest for 20-30 minutes. Serve over white rice. Servers 6-8.