Holiday Spectacular: From the Big Easy to the Big Apple

Holiday Spectacular: From the Big Easy to the Big Apple

What better way to enjoy some holiday cheer than with the Louisiana Philharmonic Orchestra and the 610 Stompers…. 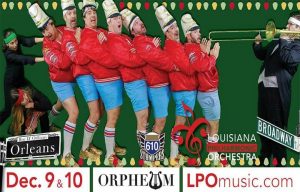 Conductor:
Constantine Kitsopoulos has made a name for himself as a conductor whose musical experiences comfortably span the worlds of opera and symphony, where he conducts in such venues as Carnegie Hall, Alice Tully Hall and Royal Albert Hall, and musical theater, where he can be found leading orchestras on Broadway. Mr. Kitsopoulos is in his third season as music director of the Queens Symphony Orchestra and continues as general director of Chatham Opera, which he founded in 2005. This season Mr. Kitsopoulos also makes debuts with the New York Pops, Colorado Symphony, Pittsburgh Symphony, Houston Symphony, Elgin Symphony and Westchester Philharmonic.

610 Stompers:
Conceived on a simple premise – that Ordinary Men could and should entertain the world with Extraordinary Moves – the 610 Stompers were born in the summer of 2009, just as our beloved Saints began their march to the Superbowl. As fate would have it, the Stompers were baptized in the twin crucibles of the now famous “Buddy D” parade and the “Lombardi Gras” Superbowl Parade – our first two public performances.
From there we have gone on to perform in Mardi Gras parades, at Hornets games, on local television and radio, and we’ve lent a hand to many charitable organizations in their fundraising efforts. We’ve even danced on the “Tonight Show”. It’s been an unforgettable ride, but our best is yet to come. The 610 Stompers is a diverse group of ordinary men, from their 20s to their 60s. We are doctors, lawyers, professionals, laborers, students, teachers, and parents. We are different but we’re the same, and we’re brought together by our ongoing desire to entertain the world with our “Extraordinary Moves”, and in doing so, give back to the community that we love.