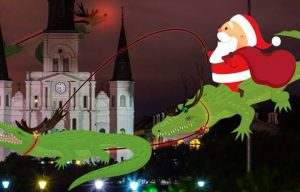 Santa Claus transforms into Père Noël when his sleigh reaches the bayous of Cajun Country in Louisiana. His sleigh turns into a pirogue, and his reindeer turn into alligators.  Père Noël and his gators follow the bonfires, built as 20 foot towers, along the levees to bring presents to les bonnes enfants. He makes his way to their houses on the South Louisiana Rivers and bayous. Just like the reindeers, Santa’s alligators all have names. They are Tiboy, Suzette, Renée, Ninette, Pierre, Alcée, Celeste, and Gaston.

The bonfires also light the way for the folks attending Midnight Mass.  This is a very Catholic region, and these traditions have been followed by generations of men and women.  After mass, folks enjoy a bit of hot Gumbo before retiring for the night.  However, while the bonfires are burning prior to mass, family and friends gather for a nice bowl of Gumbo (usually consisting of crab, shrimp, and/or oysters) and some Jambalaya (either made with seafood or chicken with Andouille sausage) served with hot French bread that has been buttered.  There’s music, laughter, and dancing as all make merry on Christmas Eve as they bring each other glad tidings. Stockings or socks are hung by the fireplace for Père Noël to leave candies, fruit, and small gifts.

Join us at Mulate’s to sample Cajun cuisine and dance to the music of the holidays. Although we are closed on Christmas Eve and Christmas Day, be our guest at 201 Julia Street in the Warehouse District, and laissez les bon temps rouler. For more information and to make reservations to host a special event, call (504) 522-1492 or contact us by email at chantelle@mulates.com.