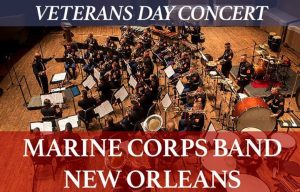 Seating is General Admission.
No tickets or reservations are required.

Founded in 1978 by Maestro Dennis G. Assaf and Hannah Cunningham, the Jefferson Performing Arts Society is a non-profit professional arts organization whose mission is to promote arts performance, training, and outreach by providing a diverse range of quality programs that entertain, educate and enrich the cultural and economic vitality of Jefferson Parish, Greater New Orleans and the Gulf South.

Since November 10, 1775 precision and adaptability have been the hallmarks of all Marine Corps units. Marine Corps Band New Orleans is no different. The band is dedicated to excellence and committed to providing America with a glimpse of the Marine Corps’ proficiency and versatility.

The band is proud to be located in the historically and culturally significant city of New Orleans. They frequently perform in a variety of local events and, when they travel throughout the country, they take every opportunity to share the spirit of the Big Easy with its audiences.