What is the difference between red and black pepper? 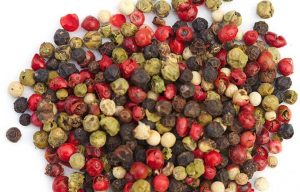 It’s a major component in Cajun Cuisine. Let’s take a look at the difference between red and black pepper! Why is red pepper so much hotter than black pepper? Is Cayenne and red pepper one in the same?

Black pepper comes from the vine known as piper nigrum, as does green and white peppercorns which are the earlier stages of black peppercorns. This vine is a member of the Piperaceae family widely grown throughout Sri Lanka and Southern India, as well as throughout the tropics. It flourishes in warm, tropical climates. When this fruit is harvested and then dried, black peppercorns result. They are packaged whole and ground to go to market. Black pepper is the most popular spice around the world.

Crushed red pepper flakes, on the other hand, is one of many cultivars of Capsicum annum. This fruit flourishes in subtropical and tropical climates. These peppers are harvested, then dried, and are crushed before packaging. Cayenne pepper is the finely ground and very hot version of a particular variety of Capsicum annum. Although crushed red pepper flakes and cayenne pepper are in the same family, they are of two different cultivars. They vary in heat due to the difference in the peppers However, these two varieties are important ingredients in Cajun cuisine.

Cajun cuisine has evolved over time by adapting to what is available from the land and sea. Prior to being ousted from Canada in he 1700’s, Acadians fished in the North Atlantic. Moving south to Louisiana, they fished what was in the bayous and the Gulf of Mexico. They adapted from cooking with potatoes to cooking with rice, which grows abundantly in Louisiana. Bell peppers replaced carrots, black and red peppers were introduced as well. Spanish, Native American, and African American influenced the evolution of Cajun cuisine into what it is today.

Join us at Mulate’s, located at 201 Julia Street in the Warehouse District, and laissez les bon temps rouler. For more information, call (504) 522-1492 or contact us by email at chantelle@mulates.com. Bon appétit!