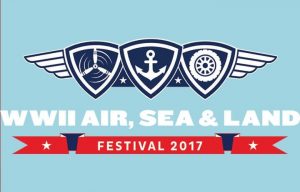 The Kid Zone is bigger in 2017—with an expanded children’s obstacle course, along with inflatables, a rock wall, STEM-based activities, hands-on history with WWII gear, photo stations, and face painting. Kids will also have access to the US Air Force’s onsite performance lab, complete with an Oculus Rift flight simulator, pull-up bar challenge, touch screen challenge games, and more!

The Victory Parade will be an hour-long parade celebrating the machines of World War II and the men and women who utilized them. Led by vehicles from the Museum’s collection, including tanks, the parade will also feature several Mardi Gras elements. The 610 Stompers will join us on Saturday only, the Legion of Mars will participate all three days, and several civic groups such as boy scouts, ROTC, and Civil Air Patrol will all be there. Don’t miss this chance to see the vehicles in action as we honor the WWII generation!

Visitors can relive history and ride on some of the rarest WWII aircraft in existence. This unique airborne experience allows visitors to sit in a seat once occupied by a veteran and see and feel the WWII flight experience. Tickets purchased separately.

Guests will get the opportunity to walk alongside PT-305, the world’s only fully restored, combat-veteran PT boat. Experience history like never before with this in-depth tour.