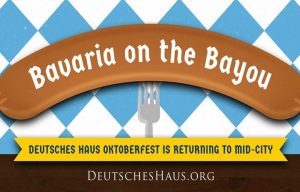 October is a wonderful time in New Orleans. The weather starts to get a little cooler, the humidity reduces (a little), and there are lots of great festivals…including the Deutsches Haus Oktoberfest 2017.

If you have never done the Chicken Dance, this is your opportunity to learn among friends.

The Chicken dance is extremely fun to watch and even more fun to do. The dance starts with everyone making a chicken beak with their hands and moving them to the beat of the music. The dance evolves to flapping your chicken wings then even to spinning tail feathers.  You will join hands with old friends and new friends and just dance and laugh throughout the song. But don’t worry, the chicken dance is only small part of the festival’s entertainment. There are different bands throughout the festivals with lots of different dances to learn.

There will be lots of great food to enjoy.

You will get to enjoy a lot of great German Food including: brats, sauerkraut, special dinners like schnitzel, meatloaf, pork loin, sauerbraten, variety of German cheeses, large Bavarian-style pretzels, German desserts, and Bavarian nuts. There will also be more than 16 different German Beers, more than 20 different schnapps, and over 7 different wines to enjoy and sample. Let’s not forget about the Chicken Dance along with Oompah  Music, Dance Performances, and even Masskrugstemmen or Beer Stein Holding Contest Daily. On October 13, 2017, there is also the Oktoberfest 2017 5k Run/Walk (http://www.runnotc.org/races/2017/oktoberfest.shtml). Plus on October 21st, 2017, you can enjoy the Dachshund Dash with about 60-75 wiener dogs racing in a variety of categories.

Where Is The Festival Located?

Did you know that Mulate’s was inspired by German Beer Gardens?

Mulate’s is known as the original Cajun restaurant, famous for preserving and celebrating the food, music and culture found in the small towns and along the bayous of south Louisiana. But the restaurant that prides itself on being true to its roots would never have opened its doors if owner Kerry Boutté hadn’t ventured out of Cajun Country and into restaurants and dance halls of New Orleans, Houston and even Europe. There is a lot to learn about us, so just stop in and experience the original Cajun restaurant.

What Boutté envisioned was an entire experience-beyond just food-based on the Cajun culture he loved. Like most Cajuns growing up in the 1950s, Boutté took his Cajun lifestyle for granted until he spent some time in another part of the world. In the late 1960s, he went into the Army and ended up near Frankfurt, Germany. It was there that Boutté developed an interest in art, something he shares with patrons to Mulate’s, where works of local artists cover the walls.

Boutté’s experience in Germany also introduced him to beer gardens, places where people of all ages came together to eat, drink and dance to traditional German music. Thousands of miles from home, Boutté immediately saw the connection to his own Cajun culture, where families gathered in their homes to enjoy good food and a unique musical tradition, both passed down from generation to generation. Enjoying the food, music and culture of the German people, Boutté began to think about creating a similar feeling back home, where the culture was just as fascinating and the food even better.

After a few years in the restaurant business, Boutté was ready to make his vision come to life. In 1980, he opened Mulate’s in a small, nondescript building in Breaux Bridge, not far from his hometown and the rest…well stop Mulate’s on 201 Julia Street, New Orleans, LA 70130 and let us know what you think.