What is Cajun Music?

WHAT IS CAJUN MUSIC? 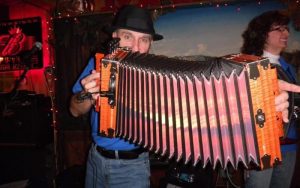 Cajun music is a native Louisiana art form, rooted in the ballads of the Acadians of Canada. It is indigenous to Louisiana as an integral part of folk culture. The primary instruments used by these musicians are: the Cajun accordion, fiddle, steel guitar, guitar, triangle, harmonica, bass guitar, and upright bass. However, Zydeco (a fusion genre) musicians also incorporate drums, the vest frottoir, and the wash board. Zydeco, originating with early 20th century French Creoles in southwest Louisiana, blends Creole music, African American blues, jazz, and Cajun music giving it a unique flavor. Swamp Pop is another fusion genre which originated in the 1950’s. It is a blend of Cajun music, Rock & Roll, New Orleans R & B, Country & Western, and Rockabilly. These musicians predominantly have vocals and play piano, drums, electric guitar, bass guitar, and saxophone.

Cajun music, having been originally from ballads, has transformed to dance music. The music was essential for intimate gatherings on the front porch, an all night house dance known as a bal de maison, or larger gatherings in a dance hall called a fais do-do. There are several variations of Cajun dance: a one step called a Cajun jig; a two step called a Cajun Jitterbug; and a Cajun Waltz. Zydeco dancing is a  jitterbug. A Cajun dancer will travel around the dance floor whereas the zydeco dancer will dance in a smaller footprint on the dance floor.

Essentially, there is a fais do-do nightly at Mulate’s. In addition to authentic Cajun cuisine and libations, you can dance the night away in true Cajun style. You’ll hear live music from local Cajun musicians, and can learn how to Cajun dance. Join us at Mulate’s, located at 201 Julia Street in the Warehouse District, and laissez les bon temps rouler. For more information, call (504) 522-1492 or contact us by email at chantelle@mulates.com.