We have probably all seen the Tarzan movies and cartoons, but have you ever seen the play? 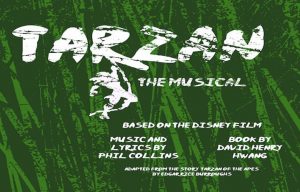 Washed up on the shores of West Africa, an infant boy is taken in and raised by gorillas who name him Tarzan. Apart from striving for acceptance from his ape father, Tarzan’s life is mostly monkey business until a human expedition treks into his tribe’s territory and he encounters creatures like himself for the first time. Tarzan struggles to navigate a jungle, thick with emotion as he discovers his animal upbringing clashing with his human instincts.

This production features a wonderful cast of talented actors and musicians and is directed and choreographed by Kenneth Beck. Theater goers will be delighted with the aerial artistry and flying effects that will certainly have you on the edge of your seat for the entire production.

If you are going to head out to theater, stop by Mulate’s Restaurant for a great Cajun meal and maybe some Cajun dancing.