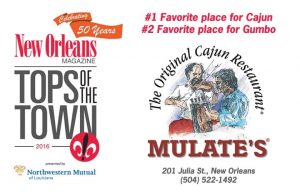 What is Tops of the Town?

Tops of the Town is a poll that New Orleans Magazine put out to local New Orleanians in their magazine and online. The purpose is to get locals to give their real opinions on what they think are the Tops of the Town in New Orleans ranging from best Gumbo to Best Realtor. Over 9,500 people voted to come up with the results and Mulate’s Won! Click here to see all of the results.

We have a great Cajun Menu.

We have a large menu of great Cajun food from Gumbos to great seafood dishes. If you are interested in one of our Gumbo Recipes, click here and give it a try. We have something for everyone. Click here to see our menu.

Mulate’s is known as the original Cajun restaurant, famous for preserving and celebrating the food, music and culture found in the small towns and along the bayous of south Louisiana. But the restaurant that prides itself on being true to its roots would never have opened its doors if owner Kerry Boutté hadn’t ventured out of Cajun Country and into restaurants and dance halls of New Orleans, Houston and even Europe. There is a lot to learn about us, so just stop in an experience the original Cajun restaurant.

Of course, it all started in the small Cajun town of Arnaudville where Boutté grew up. His mother Ida was a renowned Cajun cook. Boutté watched her prepare everything from gumbo and fried chicken to fried calf’s brain and corn maque choux. He didn’t learn how to cook at her stove, but he learned how to appreciate good cooking. All of the recipes on Mulate’s menu find their roots in Ida Boutté’s kitchen.

Boutté’s own passion for preparing good food started with a job in a meat market in his late teens. Later, he honed his skills working with the Landry family at Don’s Restaurant in Morgan City and in Houston, ironically, as a manager. In an effort to put out the best product he could, Boutté learned every aspect of the business. He spent time in the kitchen creating his own dishes and learning how to dish out delicious authentic Cajun food night after night. Before long, he knew having his own restaurant was the only way he could make the decisions and give his customers the meals and the experience he had in mind.

What Boutté envisioned was an entire experience-beyond just food-based on the Cajun culture he loved. Like most Cajuns growing up in the 1950s, Boutté took his Cajun lifestyle for granted until he spent some time in another part of the world. In the late 1960s, he went into the Army and ended up near Frankfurt, Germany. It was there that Boutté developed an interest in art, something he shares with patrons to Mulate’s, where works of local artists cover the walls.

Boutté’s experience in Germany also introduced him to beer gardens, places where people of all ages came together to eat, drink and dance to traditional German music. Thousands of miles from home, Boutté immediately saw the connection to his own Cajun culture, where families gathered in their homes to enjoy good food and a unique musical tradition, both passed down from generation to generation. Enjoying the food, music and culture of the German people, Boutté began to think about creating a similar feeling back home, where the culture was just as fascinating and the food even better.

After a few years in the restaurant business, Boutté was ready to make his vision come to life. In 1980, he opened Mulate’s in a small, nondescript building in Breaux Bridge, not far from his hometown. His staff consisted of one cook, two waitresses and himself-more than enough to serve the two customers who came through the door the first day. The first month netted three thousand dollars in gross sales, but Boutté knew word would spread. He stuck to his goal of serving authentic Cajun food with consistent quality.

Mulate’s survived and grew, and after several months Boutté began looking for ways to feature Cajun music in the restaurant. He booked local musician Zachary Richard, and on the first evening Richard played, Boutté knew this was it-the food, the music and the atmosphere he wanted for Mulate’s. Only one thing was missing-the customers. That first night, no one came, but Boutté signed Richard up for another night the following week. Eventually, people did come and Mulate’s became known for its Cajun music.

Featuring Cajun musicians at Mulate’s not only helped launch a revival of Cajun music. It helped to bring the Cajun culture into the international spotlight. Boutté turned to musicians like Richard and Michael Doucet, who played traditional Cajun music, and to old-timers such as Hector Duhon and Octa Clark. He opened up a space in front of the bandstand and welcomed people to dance. Soon the nights that Mulate’s offered live music were the restaurant’s hottest nights. He gradually added more musicians until the restaurant had live music seven nights a week. Even in its first few years, Mulate’s attracted people from around the world as well as locals. Visitors and travel writers spread the word about how much fun they had at the little restaurant. With the World’s Fair planned for New Orleans in 1984, Boutté saw an opportunity to spread the word even further. He began planning a year in advance, contacting tour bus operators and bringing them to Mulate’s for a taste of what he could provide their customers. In no time more than a hundred busses signed up. When the World’s Fair came around, not only the tour busses, but dozens of other visitors who had read about Mulate’s in newspapers and magazines made the trip to Cajun Country to experience it for themselves.