Latest From The Blog

Bananas Foster hails from New Orleans around 1951. By definition, Bananas Foster is a dessert of lengthwise-sliced bananas sauteed in rum, banana liqueur, and brown sugar a 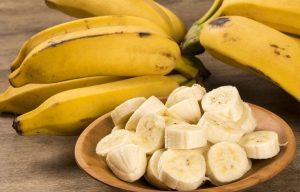 nd served with vanilla ice cream. When the bananas have been softened and start to brown, the cook can tip the pan to set the alcohol on fire.

New Orleans was a huge port for shipments from South America and Central American and one of those products was bananas. The availability of the banana gave way to the creations of a new dessert using bananas.  There are many different versions of the famous Bananas Foster Recipe, but the owner of Mulate’s Restaurant, Kerry Boutte, adds his own little twist of food love in his recipe.

Give it a try and tell us what you think.

4 bananas, sliced in half both ways

Melt butter in large saucepan. Add brown sugar and cinnamon, stir constantly for about 1 minute. Add bananas and banana liqueur, cook bananas for about 30 seconds on each side. The mixture should be simmering. Add rum, remove from heat, and immediately light with a match. Shake pan, flame will go out, and then serve over ice cream. Serves 6-8.

THE STORY OF MULATE’S

Mulate’s is known as the original Cajun restaurant, famous for preserving and celebrating the food, music and culture found in the small towns and along the bayous of south Louisiana. But the restaurant that prides itself on being true to its roots would never have opened its doors if owner Kerry Boutté hadn’t ventured out of Cajun Country and into restaurants and dance halls of New Orleans, Houston and even Europe. There is a lot to learn about us, so just stop in an experience the original Cajun restaurant. Click here to see more.
cheryl bauman2016-10-17T09:48:48-05:00October 17th, 2016|News, Recipe|